This book, Storočia astronómie v Prešove (Centuries of Astronomy in Prešov), was published on the occasion of the 70th anniversary of the first public observatory in Slovakia, which was established in Prešov. The author divided the book into twelve chapters: 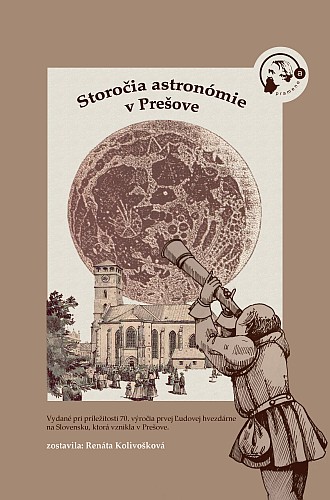 The author of this publication is Renáta Kolivošková, who has been working as an independent specialist at the Observatory and Planetarium (hereinafter referred to as HaP) in Prešov since 1990. She is a long-term contributor to the Astronomický informátor bulletin (Astronomical Informant), published by HaP Prešov for the general public, as well s for members of the Slovak Astronomical Society at the Slovak Academy of Sciences. Her professional activities include in particular the preparation of popular material in the form of educational publications for children and youths; audiovisual programs in the planetarium; the organization of seminars for teachers of physics; and various projects focusing on astronomy. Given these facts, I cannot imagine a more appropriate author for the book under discussion here.

The early chapters of this historical tour map the astronomical activities in the city of Prešov and its surroundings long before the establishment of the Observatory itself. Although it often happens that the archive is the only source of relevant historical information, in this case the author still managed to identify and summarize the activities of important astronomers present between the fifteenth and nineteenth centuries.

A few pages later, I was pleasantly surprised and pleased by the text, which describes the difficult path of one telescope, the so-called ‘Staroďalská 60-ka’. Much has been written about the journey of this telescope, but this case, the author summarizes its pilgrimage into a holistic story. Anyone who reads the story of this telescope will understand that it educated more than one generation of Slovak astronomers.

The book also introduces us to the personalities involved in the birth of the Observatory in 1948. This was the result of the endless efforts of people like Alexej Duchoň, Ján Lešo, Ján Hanzély, Štefan Karabín, and the first Director, Imrich Szeghy. Their diligence resulted in the ceremonial opening of the Public Observatory of Prešov, in a building situated on Rumanova Street. This happened on 28 October 1948, which was an important date at that time: The Day of Nationalization, and at the same time the 30th anniversary of the establishment of the Czechoslovak Republic.

This area has developed in a very remarkable way in Prešov. Ján Adam Rayman an eighteenth century doctor, pharmacist and polymath was the first to make meteorological observations in Slovakia. He began recording temperature and air pressure in Prešov from 1 June 1717 and continued to make readings until 30 June 1720. After his death, other pharmacists continued these observations, because they considered them important in detection of mass diseases and infections. Thanks to these observations, Prešov has maintained meteorological stations of international importance since 1860.

The next chapter of this book logically follows up on the previous part, by introducing us to the professional focus of the Observatory in Prešov. Reader have an opportunity to see the photographic documentation of the observing techniques, which the Observatory was and still is equipped with, and without which the observations of the Sun, stars, meteors or comets would not be possible. The text describes technical parameters of instruments, supplemented by attractive highquality photographs of celestial objects.

The most important area of work of the Observatory in Prešov was and still is astronomy popularization and education. In the 1950s and 1960s this was mainly through lectures, discussions and public observing session, which of course have survived through to the present day. After the Public Observatory was taken over by the Municipal National Committee in 1955, conditions for organizing astronomical workshops were created, and these were run on a regular annual basis, including regional astronomical workshop for the leaders of astronomical clubs. In the 1970s, these programs were expanded at a local, regional even a national level, to include seminars and training sessions for teachers and leaders of astronomical clubs, and both stand-alone and traveling exhibitions. This type of work is very close to hobby group activities, particularly those of students at primary and secondary schools. Meanwhile, astronomical clubs can work under the guidance of experts from the Observatory in Prešov. Thanks to these activities, children gain a positive attitude towards the natural sciences.

The Observatory in Prešov has also been involved in a number of international astronomical campaigns involving coordinated observations of astronomical phenomena and events. Usually, the purpose has been to attract as many observers as possible. Examples of past campaigns involving the Observatory are: international observations of Halley’s Comet and Comet Hale-Bopp; the solar eclipse of August 1999; the great opposition of Mars in 2003; and the transit of Venus in 2004.

After a sustained effort, Prešov observers reached an exceptional milestone on 4 October 1984 when the planetarium building was opened. The beginning of its operation offered professionals much wider opportunities for popularization, but also for education of children, youth and the general public. It has been an integral part of the Observatory for nearly 40 years.

The book Storočia astronómie v Prešove by Kolivošková shows how many sources the author had to deal with in order to create such a cross-section of the history of astronomy in Prešov. The literature and sources point to the original texts from the founder of this scientific discipline in Prešov, Duchoň, through articles by the Directors of the Observatory, the material in the State District Archive in Prešov and in the archive of the Observatory itself. The overall impression from the book is positive. The chapters are sequential in time, as outlined in the Contents, and it is clear that the author cared about finding a balance between the text and the supporting photographs.

I think this book has something for everyone, not only people of the city Prešov but those with an interest in the history of this part of Slovakia (400km east of the capital, Bratislava). In this book, the author tried to systematize, summarize and capture as accurately as possible the important milestones in the history of astronomy in this region, and it is up to a reader to assess whether the author succeeded.